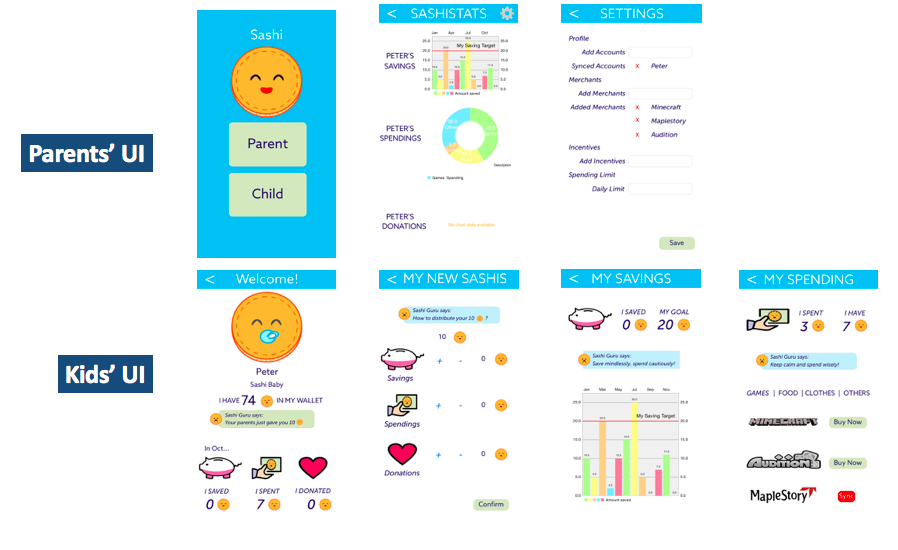 How do I cultivate saving habits in my children? How should we overhaul online purchases for children? How can we drive Bitcoin adoption? Leveraging Blockchain's API's, we have built Sashi, a children-friendly mobile Bitcoin wallet to solve these problems. When children receives Sashis from their parents, they receive a message from Sashi Guru, a character that serves as a financial advisor. They then have to choose how to split it between his wallet, savings, and donations. Save too little, and Sashi Guru steps in, telling them they should save more. Sashi Guru helps children set and track saving targets; by reaching saving targets, they can be rewarded by their parents. Children make online purchases from a list of merchants approved by their parents. Parents can also monitor their children's spending habits and set spending limits by merchant. Upon reaching a certain age, children can withdraw their Sashis as Bitcoins. Sashi educates children and empowers parents. By preparing children to be financially responsible adults, the transition to credit cards will be made easier for both children and parents alike. And by starting young, we prepare children to be lifelong Bitcoin users. Features: 1. Sashi Guru Prominent throughout the user experience, Sashi Guru is a personalized financial advisor that guides and encourages children. 2. Savings Children can deposit their Sashis into mobile piggybanks, and set/track saving targets. 3. Spending Children can track their Sashi balance and how many Sashis they have spent. They can make purchases from merchants by their parents. Parents can monitor their children's spending habits and set spending limits by merchant. Children can request for spending limits to be lifted. 4. Gamification - Sashi Journey Children progress through different Sashi stages as they become more financially literate. A child begins as Sashi Baby and make their way through Sashi Junior, Sashi Warrior, and Sashi Guru.