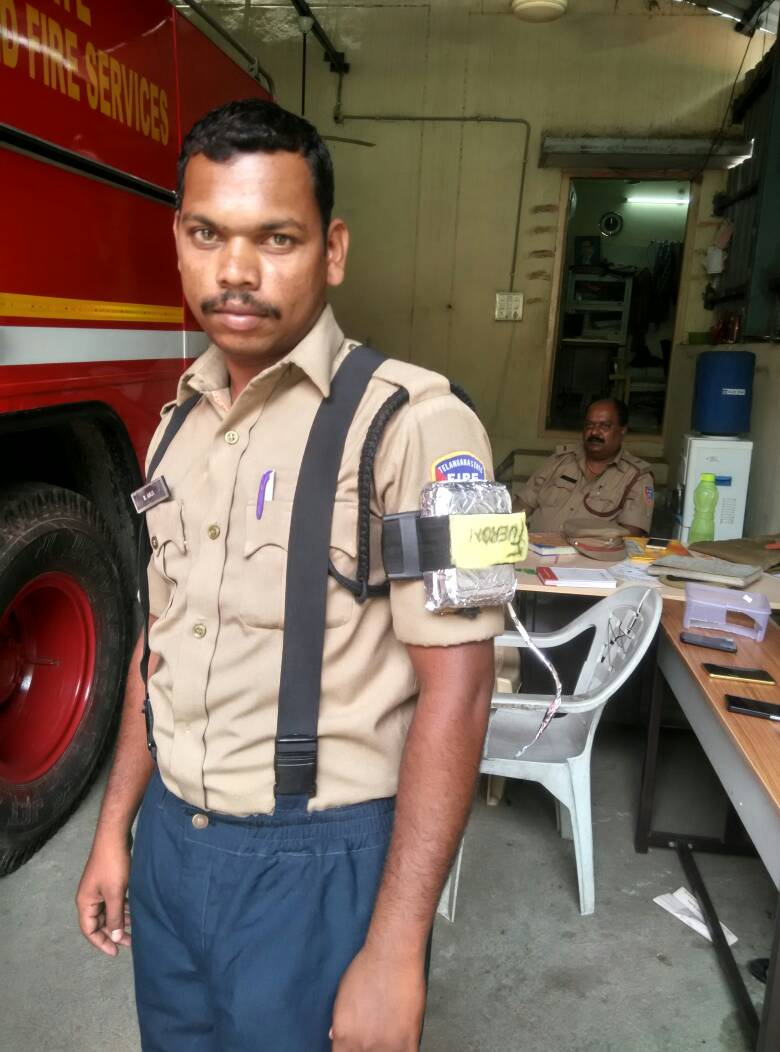 Today's emerging strategic environment and operational challenges demand that the Army develop a more responsive and maintain the lethality . The problem we are focusing to solve is to put an end to the ineffective traditional approach used by the firefighters wherein a fireman is tied with a rope and sent inside to provide a signal to the other end of the team outside when in danger by manually pulling the rope .We can't stand on only one parameter during an operation wherein the commander who stays outside being unaware of the conditions of the Fire fighters. Since ,53 % of the firefighters die due the heart attacks, we aim to provide pulse monitoring along with distances (using beacons )of the fire fighters to analyze the conditions of person in action and send the other team if in need. Hence, Product Fueron is centralized in "Rescueing the Rescuers" making it ready for prime time . Our solution basically aims at attaching beacons along with pulse sensors to the fire fighters suits so that the Fire commander is intimated about the position of the fighter inside a fire building during an operation along with constant monitoring of the health conditions via an application. The beacons constantly emit radio signals scanned by the mobile device to calculate the distance using the signal strength being received. The unique feature of our product FUERON includes the integration of IOT with Beacon Technology that determines the distance and pulse rates of the fighters to the Fire Commander. Considering the market scenario, the US Fire Administrative Services is already into finding various possibilities to solve the above problem and currently there are no technological advancements being employed in the Fire department. Moreover, the Telangana Govt invests 64 cr Rs for the Fire Services in the Fire departments annually. Hence, if invested , our product Fueron could become one of the biggest technological advancements in the Fire Departments.

EXCITE 2k17 was a fabulous journey to get exposure to industries considering the market scenarios as well. The entire programme was filled with wonderful ideas and thoughts from the brightest minds across the country. We were by the various products being showcased by the students at EXCITE. Excite has been one of the platforms to with innovative and logical ideas solving the real-time problems existing in the society both locally and globally. The 4 phases of EXCITE -- 1)Idea Validation 2)Design of model 3)Build the prototype 4)Launch of the final product has been very helpful to build prototypes and to interact with eminent mentors from various industries. Overall, the experience at excite is something which we could imbibe in our lives forever and ever!!!
0

The day began with the Data Visualization workshop and we had gained insights of it.
0

29.05.2017 : Had a seminar on Design Thinking in the morning. Tried to do brain storm and apply design thinking tips on our project in the afternoon.A day well spent along with much fun by making friends.
0

27.05.2017 : So excited by acquainting with various industrial mentors and receiving their feedback.
0

24-05-2017: A demonstration on NodeMCU and building various client applications using MIT APP INVENTOR with a connection to the cloud thingspeak.com
0

24.05.2017 : Basic data transfer to cloud from the sensors and development of client applications were handled.
0

24.05.2017 SALAVADI SONY: Worked well with NodeMCU and had a friendly interaction to know about all the sensors
0

22-05-2017 : The day began with an Introductory session in Iot by Mr. Pankaj . There by proceeded with the selection of ideas and its guidelines. Finally , the day was filled with ideas and thoughts!
0

23.05.2017 : Understood the architecture and working of Arduino in the morning session.Experienced hands-on with different sensors post lunch.
0

22.05.2017 : STPPL NAVYA An introduction session to IOT and its applications by Mr.Pankaj during pre-lunch. Procurement of hardware components and introduction followed by registration in hackathon. io website in the post-lunch session.
0

22.05.2017: SALAVADI SONY: The utility of IoT on various domains by Pankaj in the morning session followed by the acquainting to the hackathon.io website with pitching the idea.
0