Peer to Peer Energy Trading on the Blockchain 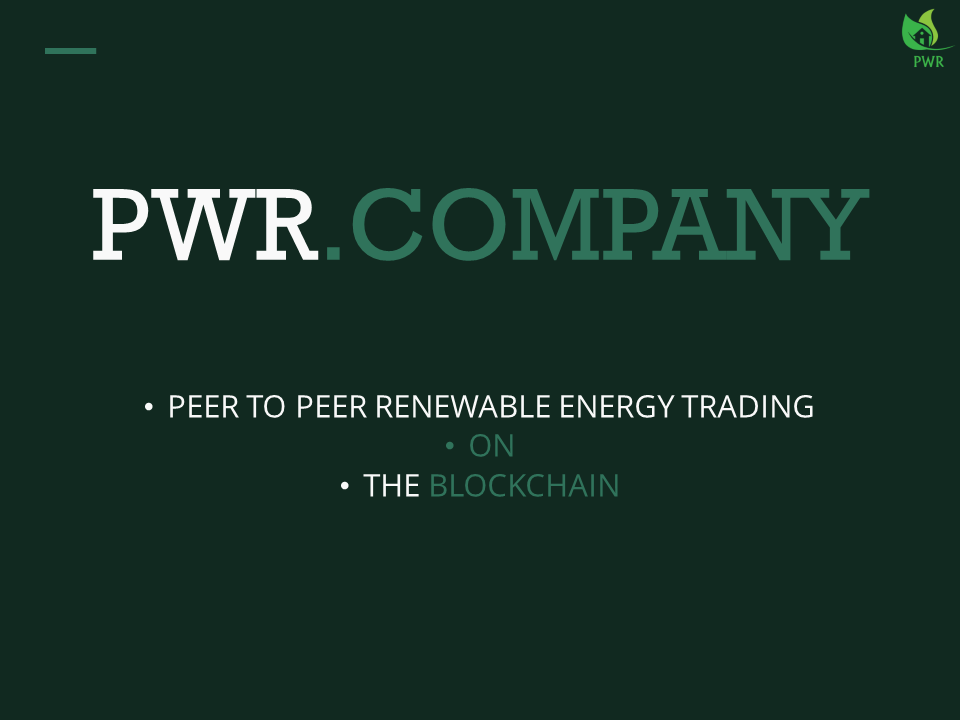 Video is here. https://www.youtube.com/watch?v=DpO9_SrBbuI - For easier viewing please visit___________________ http://www.pwr.company/________________________________________________________________________________________________ http://github.com/pwr-blockchain ______________________ - **PWR.Company** is a project focussed on peer to peer renewable energy trading on the Blockchain. Born from the need to solve a number of problems – the largest driver of the project for our team is contributing to help solve a global problem – global warming. The planet is heating up. There’s no denying that we need to, as a species, do better to protect the world for future generations. There is far too much inefficiency in the current power distribution networks – not only for fossil fuels but also for renewables. And this creates a number of environmental and logistical problems. There are far too many players in the current value chain in the energy industry who offer no value other than to trade – to buy and sell energy. They reap huge profits for doing very little other than marking up and down pricing and making profits. PWR.Company plans to create a series of pilot projects aimed at decentralising and distributing renewable energy at the community level and allow for consumers to become prosumers. We want to help set the frameworks needed to begin weaning society from dirty fossil fuels and play a part in creating a more efficient system for renewable power collection, storage and distribution which will operate on local levels rather than national or even international levels which is the current case. By using Blockchain technology we can use distributed and decentralised technology to build distributed and decentralised microgrids. PWR.Company plans to take advantage of the perfect timing. The opportunity is ripe. The scope of global fossil fuel divestment has doubled over the past 20 months, with institutions and individuals controlling $5.197 trillion in assets pledging to divest. Reports state that some 688 institutions and 58,399 individuals across 76 countries have committed to divest from fossil fuels. The funding is there. The economics now make sense – 2016 was year the Rubicon was finally crossed - and for the first time ever, solar and wind power is cheaper than fossil fuels. The financial inventive is clearer and stronger than ever for people, companies, organisation, government and others to shift to renewables. PWR.Company’s team consists of a team of Blockchain developers, engineers and experts who feel that Blockchain with its immutable records, it’s rock solid ledger technology, and the emerging science of cryptocurrency allows for the creation of a highly efficient peer to peer renewable energy trading market for prosumers. PWR.Company wants to trial in some 300-400 homes in The Netherlands (and Dubai?) - outfitting each home with a solar array, battery systems, inverters, and appropriate hardware and software technology to have the ability to capture, store and trade renewable energy on a microgrid. Energy will then be traded on a Blockchain-fuelled ledger on Ethereum allowing for immutable records, rock solid security, and zero cost transactions. Unlike other peer to peer solar trading startups on the market, PWR uses deep cycle batteries in each household for power storage, rather than having to push into the grid directly and immediately. This creates a stronger environment within which to trade excess energy as it’s easily measurable and creates a stable ecosystem within which to trade. PWR.Company plans to create a digital asset or cryptocurrency called PWRToken. Utility is one of the most challenging parts of creating a viable and useful cryptocurrency (digital asset) but with energy, it’s simplified. 1MWh equals one PWRToken. We have discussed raising funds in a fully compliant (KYC/AML) Initial Coin Offering (ICO) based PWRToken for investors. This currency may then be tied to 1MWH and floated on a number of cryptocurrency exchanges online where it can then be bought and sold for Fiat or other cryptocurrencies. In the future if we choose to move from Ethereum to our own Blockchain PWRToken can be used to validate transactions and create blocks for miners using PoS other emerging consensus mechanisms. PWR.Company believes that as renewable energy sources increase, so does the risk of overloading the grid or having to dump excess power. There’s currently a huge shortage in most countries for energy storage. With the PWR microgrid, each home would contain a deep cycle battery array which could store not only locally produced energy, but for a fee, store energy from outside sources such as local solar and wind farms, therefore creating even more revenue. By having storage, this takes out the need to make estimated production from weather reports as other projects similar in the market. PWR.Company has a vision – we plan to start a foundation – our goal is profit with a purpose. By open sourcing the core software we can allow for others to build on the work we have done. We can glean revenue in a number of ways – starting with simply taking a nano slice of every transaction that occurs on the network. Or by building up services around the project, from consulting to mining to extra proprietary addons built for the open source core software. Perhaps the most interesting way we can build a significant pool of growth capital by doing an Initial Coin Offering – and issuing PWRTokens in a fully compliant (KYC/AML) Initial Coin Offering (ICO) via our partners at Tokenmarket.net (Gibraltar Stock Exchange). This would give us immediate growth capital by creating liquidity and giving PWRTokens immediate value.

perfect platform, why did you make such a long video more than 3 minutes?!?
0