A 'Prescription Hub' to automate prescription processes, and alert Regulators of potential abuse 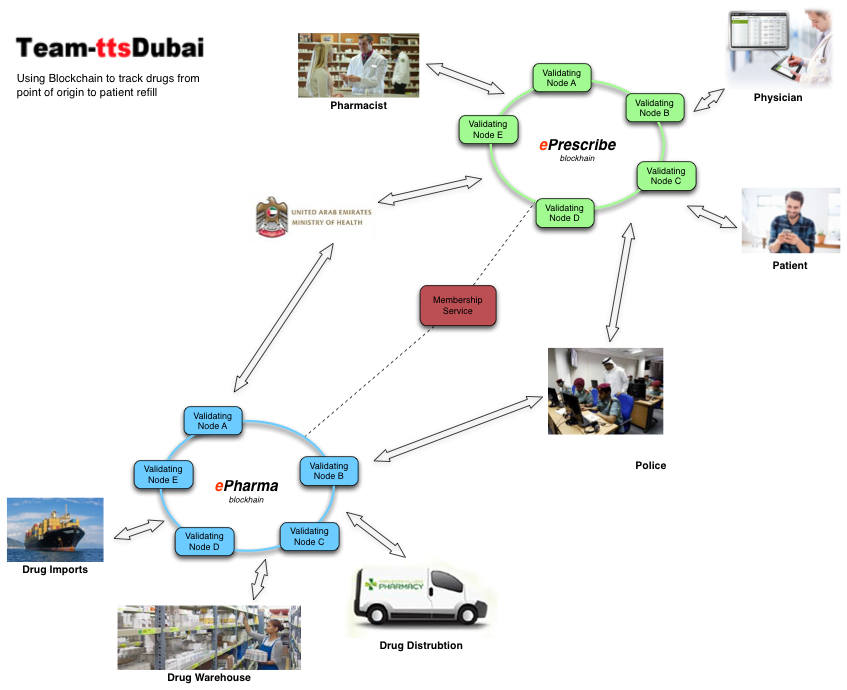 ePrescribe and ePharma are blockchain-based prescription drug tracking systems that automate tracking of legal drugs from point of origin to prescription. Prescription Drug Abuse is a serious issue resulting in an increased cost to both government and society. Fraudulent prescriptions, laundering of legal drugs for illicit use, and obtaining similar prescriptions from multiple doctors are common examples of fraud. Theft within the drug supply chain is also a problem. Electronic Medical Records do not eliminate fraud and abuse, as such systems are focused on patient care and privacy. Lack of interoperability further complicates the ability of these tools to monitor and detect fraud. The solution is the introduction of a blockchain-based Prescription Hub allowing the tracking of legal drugs from origin to prescription fulfillment, while maintaining an even higher level of privacy for patients and their medical records. Physicians would use a standalone client to issue new prescriptions, or Electronic Medical Record systems would synchronize directly with this hub to perform this task. Regulators have a dedicated dashboard alerting them to potential abuse, whereas Pharmacists have a dedicated tablet-based system for managing prescription fulfillment. Patients have a dedicated mobile app. Besides automating the processes of the "last mile" of a very complicated process, the establishment of an ePrescribe™ Network, for prescription issuance and fulfillment, satisfies several “pain points” in four (4) out of the five (5) Virtual Govhack Challenges: Second: Reducing the Paper Footprint – the system will reduce the number of trees ‘killed’ by an amount equal to the number of trees needed for paper prescriptions. Third: Fighting Fraud and Proceeds of Crime – all stages of prescription (issuance and fulfillment) are tracked and recorded and represent immutable records that cannot be deleted or altered, thus aiding in reducing corruption and crime. A reduction in prescription opiate abuse will have a cascading effect on other forms of opiate abuse, such as heroin, which is often where those dependent on prescription pain pills turn when they can no longer afford access to illegal pills. Fourth: The prescription workflow process is an integral part of the ‘medical record chain of care’ and as such ePrescribe™ will do its part in seeing that the correct prescription gets to the right party – in the right volume / amount, thus improving the patient care experience and reducing overall costs. Fifth: When ePrescribe™ is integrated / interfaced with the ePharma™ (Drug Tracking and Management System), the results unveil an ePrescription™ Drug Tracking and Enforcement Platform™ that will be a welcomed addition to the cyber infrastructure of any Smart City.