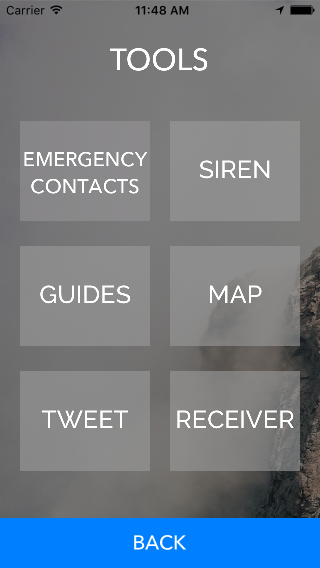 Salus, an IOS based application is developed for the increasing the efficiency of rescue operations in case of any disaster or an emergency. Salus is a Latin Word for Safety. Salus was a Roman goddess. She was the goddess of safety and well-being (welfare, health and prosperity) of both the individual and the state. She is sometimes equated with the Greek goddess Hygieia. Disaster management (or emergency management) is the creation of plans through which communities reduce vulnerability to hazards and cope with disasters. Disaster management does not avert or eliminate the threats instead; it focuses on creating plans to decrease the effect of disasters. Failure to create a plan could lead to human mortality, lost revenue, and damage to assets. Disasters are classified into Natural & Man-made. Events covered by disaster management include acts of terrorism, industrial sabotage, fire, natural disasters (such as earthquakes, hurricanes, etc.), public disorder, industrial accidents, and communication failures. Every year a number of disasters happen & many innocents are victims as the rescue team is unable to spot them. The number of disasters are increasing year by year & so the victims. This is one of the motivations for development of this mobile application. Salus is a multifunctional mobile application that is developed for increasing the probability of rescuing the victim. The first function of Salus is an SOS feature. In SOS feature the user just presses the screen for longer duration nearly 3 sec in the application & it sends message to three emergency contacts. These contacts & the message are predefined by the user at the time of first use of application after installation. If the user by any chance presses the button there is also a disable option configured by long press on the screen ( touch for 5 sec). The second feature is the Tweet Feature in the tools section in which the application uses internet & tweets on twitter. The motive behind choosing the social media is past statistical data which shows that Social Media Sites Contributed more to help rescue operations. In case of Hurricane Sandy in USA in year 2012, approximately 20,000,000 number of tweets sent about sandy between October 27 – 01 November 2012 in which about 34% of news information was storm related discussion on Twitter, including "news organizations providing content, government sources offering information, people sharing their own eyewitness accounts and still more passing along information posted by others." The second largest (25%) share of Twitter conversation about the hurricane involved people sharing photos and videos. It served as a lifeline for many victims as their location was spotted & hence rescued. The third feature of Salus is Geofencing. Geo-fencing (geofencing) is a feature in a software program that uses the global positioning system (GPS) or radio frequency identification (RFID) to define geographical boundaries. As soon as the rescue team moves from one place to another, if the victim is using this app then he will receive a message from the rescue team. Then he can Signal the rescue team using a siren or buzzer which is also a feature of this application. There is one more feature which is called Beacon. It is used when there is no network or sim card in your phone. The term iBeacon and Beacon are often used interchangeably. iBeacon is the name for Apple’s technology standard, which allows Mobile Apps (running on both iOS and Android devices) to listen for signals from beacons in the physical world and react accordingly. In essence, iBeacon technology allows Mobile Apps to understand their position on a micro-local scale, and deliver hyper-contextual content to users based on location. The underlying communication technology is Bluetooth Low Energy. Bluetooth Low Energy is a wireless personal area network technology used for transmitting data over short distances. As the name implies, it’s designed for low energy consumption and cost, while maintaining a communication range similar to that of its predecessor, Classic Bluetooth. In addition to these features there are some tools. These tools consist of a Siren to attract the rescue team or any other person. A guide book dealing with various emergency situations like earthquake floods etc. Also some of the emergency contacts are available in the tools section.There is also another feature to access maps. This application would require Apple I Phone 5 & IOS Version 8 or above.This application would allow rescue team to spot victims & hence save as many victims as possible. Hence It could seem as a possible tool to save Mankind to an extent.